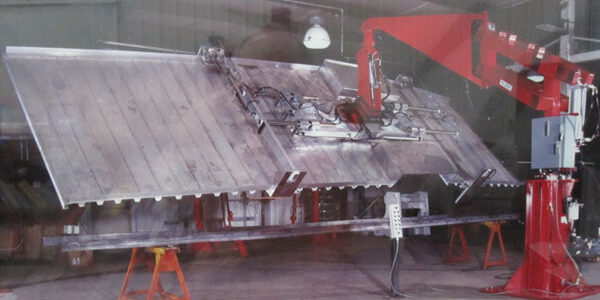 TDA Buddy manipulators, or “nobots” as we often call them, are not really in conflict with robots. We like robots. Some of our best working partners are robots.

TDA’s manipulators are manually operated, can lift up to 1,000 pounds, and can lock an object steady in 3D space. Robots have similar lifting capability. Yet there are situations where TDA’s nobots are just as capable to perform a function at a fraction of the cost, and other situations where our nobots are superior.

If you’re trying to decide whether to purchase a robot or a nobot for a task at your plant, you need to consider a combination of factors. Here are some key ones to keep in mind.

A TDA manipulator’s cost can be a low as 15 to 20 percent of a robot’s cost. That’s a pretty large savings for equipment even before you add in the cost of programming and complex maintenance that the robot requires.

Robots are generally given the advantage in this part of the equation, but the formula may be a little more complex than you think. If the function currently takes two workers to lift a load into position, the robot saves the cost of two workers, while the nobot saves the cost of one. But if we’re talking a heavy load, you’re likely to have costs incurred for workers’ compensation for back injuries related to lifting. Your insurer will be very happy to see a nobot doing the heavy lifting, so your labor savings may be more than simply eliminating the cost of one job.

This is where robots run into a problem. They’re programmed to be precise, not flexible. A robot lifting parts from a pallet dropped off by a fork-lift driver simply doesn’t work. The position of the part is never exact. Even an inch off and the robot can jam. Because the nobot is run by a human, the nobot operator simply reaches for the part wherever the lift driver left the pallet and places the part on the production line.

And if you need to change procedure in a task, there’s no reprograming needed. You simply instruct the operator that instead of putting the load here, you put it there. Or the operator can use the nobot to handle several different tasks from its position during the day

There are some jobs that a human worker has to perform while a large part is positioned and held in mid-air. Robots, however, are fenced in to keep away the human staff for safety concerns. Nobots don’t need to be fenced in. Its operator can lock a heavy part in position in 3D space while a worker completes the necessary task.

Because each situation is different and often complicated, the key point is to consider each work task individually to decide if it’s best left to a robot or a nobot. The decision you don’t have to make, however, is whether to go all robotic or all nobotic for the material handling in your plant. TDA Buddy manipulators work well alongside robots, providing smooth handoffs to robots on a production line, then handling the finished product for shipping. Our nobots often serve as the key interface between human and robots.

The Industry’s Best Hydraulic Manipulators, From a Company That Will Work with You
February 10, 2021

Need Help Deciding if an Industrial Manipulator is Worth the Cost? Start Here!
August 6, 2020

The Differences Between Hoists, Robots and Industrial Manipulators
June 8, 2020